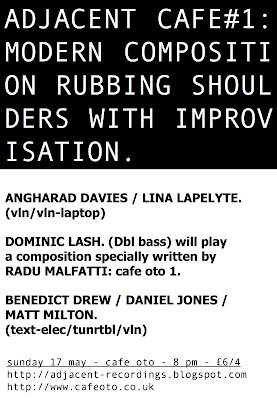 Improvised music as we know it since AMM started playing in the 1960’s has always shown strong ties with modern classical music: composers were often invited to join AMM and Cornelius Cardrew soon became a full time member. In the same time, pages of Cardrew’s graphic score Teatrise were played and tried by AMM as they were written and the group also gave performances of John Cage’s compositions.
In recent years, improvising musicians such as Radu Malfatti and Taku Sugimoto have concentrated their effort on composed works, many of which are performed by improvising musicians (Lucio Capece, Taku Unami, Toshimaru Nakamura, Axel Dorner and others). Others share their time between performance of modern compositions and improvisation (Angharad and Rhodri Davies, Lina Lapelyte, Dominic Lash, Benedict Drew, Julia Eckhardt, Robin Hayward and many more). Composers such as John Cage, Morton Feldman, Luigi Nono, Helmut Lachenmann, Michael Pisaro and the Wandelweiser collective are often cited as strong influence by improvisers. This rarely comes as a surprise when many recordings of improvised music do have strong aesthetic similarities, or at least a “shared feel”, with the work of these composers.

To which extent can we say that improvisation and composition are the most distant ends of the musical spectrum? Adjacent café is a night that aims at, far from offering an answer, acknowledging the situation described above and let the performers and the audience find the beginning of an answer for themselves.

Tonight we will listen to improvised sets by:

-Angharad Davies and Lina Lapelyte (vln, vln-laptop), who both work with composition and improvisation;

Last but not least, Dominic Lash will play “café oto 1”, a composition for double bass and pre-recorded sine waves written by Radu Malfatti for this occasion and dedicated to Dom.

About Radu Malfatti:
16.12.43 born in Innsbruck
1965-70 looked for the Academy of Music in Graz
studied with eje thelin
spoke with sonny rollins
drank coffee with luigi nono
likes to play chess with siegfried fussy
read a lot, forgot everything
http://www.timescraper.de/malfatti/index.html

Angharad Davies is a violinist based in London. She is an active performer in contemporary, improvisation and experimental music both as a soloist and within ensembles.
Since making London her base in 2002 she has developed a specific approach to the violin, extending the sound possibilities of the instrument by attaching and applying objects to the strings or by sounding unexpected parts of the instrument's body. She is dedicated to exploring and expanding sound production on the violin.
http://www.angharaddavies.com/


Benedict Drew is an artist who works in performance, sound and video.
http://www.benedictdrew.com/
http://benedictdrew.tumblr.com/

Daniel Jones is an improvising musician based in Brighton. His primary instruments are turntables and contact microphones. He last appeared on the 'Leaving Room' disc alongside David Papapostolou and a solo set can be downloaded from the Compost&Height website. Daniel has plays and has collaborated with David Papapostolou, Helena Gough, Jez Riley French, Patrick Farmer, Matt Milton and Daichi Yoshikawa.
http://www.myspace.com/stringspingsandboingythings

Lina Lapelyte lives & works in London &Vilnius. Lina works as a sound artist and composer, performs live using violin and electronics. Her work encompasses sound installations, concert works, scores for dance, theater and film. One of her field of interests is collecting information and changing its meaning by putting it into a different context. Many of her sound installations are site specific and deal with the evoking of a sense of place through its own live input – people, their voices, nature, kinetic energy. She is a composer and performer in the laptop quartet 20,21- the ensemble devoted to the performances of graphical notation scores. She produces experimental radio programs for the ResonanceFM radio station. Her music was used in films made by Anja Kirchner, Bruse la Bruse. She collaborated with artists Douglas Benford, Arturas Bumsteinas, Edie Prevost, Anton Lukoszevietze, Enrico Glerean, MAndelbrot.
She performed or her works were shown in 'vanm' (London 09), Cut and Splice'(London 08), 'iFEM' (Ivalo 08), 'Lithuanian ART' 08 (Vilnius 08), 'Skanu Mezs' (Ryga 08), 'Holland Festival' (Amsterdam 07), 'Audio Art' (Warsaw 06).Recently she has been composing multi-channel electroacoustic violin pieces for her debut album.
www.myspace.com/lapelyte

Dominic Lash is a double bassist and composer. He lives in Oxford and is very active on both the Oxford and London improvising scenes. He aims in his work to cover a broad range of approaches to improvisation and contemporary composition through varied and diverse collaboration. To this end, performances in the last six months have seen him on stage with musicians including Tony Conrad, Taylor Ho Bynum, Harris Eisenstadt, Peter Evans, Paul May, Evan Parker, John Russell and Mark Wastell, as well as the poets Sean Bonney and Keston Sutherland. His most recent CD releases are Monster Club with Tony Bevan and Chris Corsano and No Now Is So with the Alexander Hawkins Ensemble. Upcoming highlights include the CD Bestiaries (a duo with Patrick Farmer on Cathnor) and performances with Steve Beresford, John Butcher and Phil Minton.
http://www.dominiclash.co.uk

Matt Milton is a free improv violin player based in london UK. (Sometimes voice, sometimes saw, sometimes other objects, not all of which have been purchased for less than a fiver at Maplins) Tries to attend Eddie Prevost's weekly Friday evening workshop as often as poss. Organises sporadic gigs in London – see www.myspace.com/exteroceptor. Known to dabble in folk and blues guitar, mandolin and song (more of which to follow if anyone ever invents a 54 hour day). Occasionally plays bluegrass fiddle for the filthy recidivist of rockabilly, Rod Stern.
http://www.myspace.com/mattmilton
Posted by David.P at Sunday, April 19, 2009