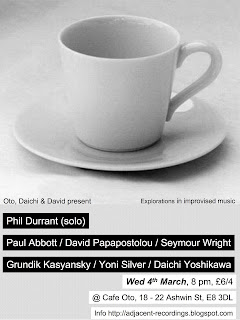 Today's concert will feature 3 sets that, each in their own way, question the nature of improvisation and of the experimentation involved in the making of such musical events.


Phil Durrant will play a solo with his computer based assemblage "Maschine".

A new trio composed of Paul Abbott (self made electro-acoustic instrument), David Papapostolou (cello, objects) and Seymour Wright (alto sax, objects) have been collaborating behind closed doors for a few months and will play a concert together for the first time.

Grundik Kasyansky (electronic) and Daichi Yoshikawa (feedback) have probably played together during Eddie Prevost's workshops, but they will confront their unruly electronics for the first time in a live context. They will play a trio with leading Israeli reedist Yoni Silver.


Further info about the musicians:

Phil Durrant (Maschine) has been active for more than 30 years, as a violinist in groups with the likes of John Butcher, John Russell and in the landmark trio with Thomas Lehn and Radu Malfatti. He later developed a computer-based virtual instrument that allows Phil a degree of control on his own sound more akin to the manipulation of “real” instruments and in the same time distinctly digital. Phil is also part of the pan-European electronic orchestra MIMEO, curated by Keith Rowe.
He has recently toured and performed in France and Germany, with his group Trio Sowari. The group reflects his wish for a project that merges the sonic of acoustic instruments (Bertrand Denzler saxophone and Burkhard Beins, drums) with the digital sound world of his laptop.
http://efi.group.shef.ac.uk/musician/mdurrant.html

Grundik Kasyansky (electronics): works in collaboration (improvisation, live installation) and solo (composition, improvisation, installation). He also designs sound for dance, theatre and film. He formed Grundik+Slava together with Slava Smelovsky in Israel in 1995. The duo quickly emerged as the key project in the Israeli experimental and electronic scene. For the last ten years he collaborated with lots of musicians, dancers, filmmakers and artists. He was born in Moscow in 1974, moved to Israel in 1991, moved to New York in 2001, moved to London in 2007, ...
http://www.myspace.com/grundikkasyansky

David Papapostolou (cello, objects) is intrigued about the basic characteristics of the sounds he generates with his cello and how these interact with other people’s sound and the performance space. He also works with electronics and field recordings and runs the Adjacent label.
http://adjacent-recordings.blogspot.com

Yoni Silver is one of the leading figures of the Israeli free improvisation scene - bass clarinetist and multi-instrumentalist Yoni Silver's music ranges from just-audible bass clarinet improvisations to full on noise, semi- composed pieces for varying ensembles, and computer music.

Seymour Wright’s approach to the saxophone is unique in the way every square inch of the instrument is thoroughly, systematically explored. What fascinates the listener at first is the rawness of Seymour’s sound, then one hears the relentless exploration at work, almost as a aim in itself.
Seymour is a member of the 9! ensemble, the trio SUM with Eddie Prevost and Ross Lambert, and has previously released records with Eddie Prevost, Keith Rowe, Sebastien Lexer, John Lely, Ross Lambert. Make sure you check his solo “Seymour Wright of Derby”, available for download at the address below!
http://incalcando.com/seymour_wright/

Daichi Yoshikawa explores the perfomative and sonic possibilities of feedback generated through piezo and magnetic pick-ups.
Posted by David.P at Friday, February 13, 2009